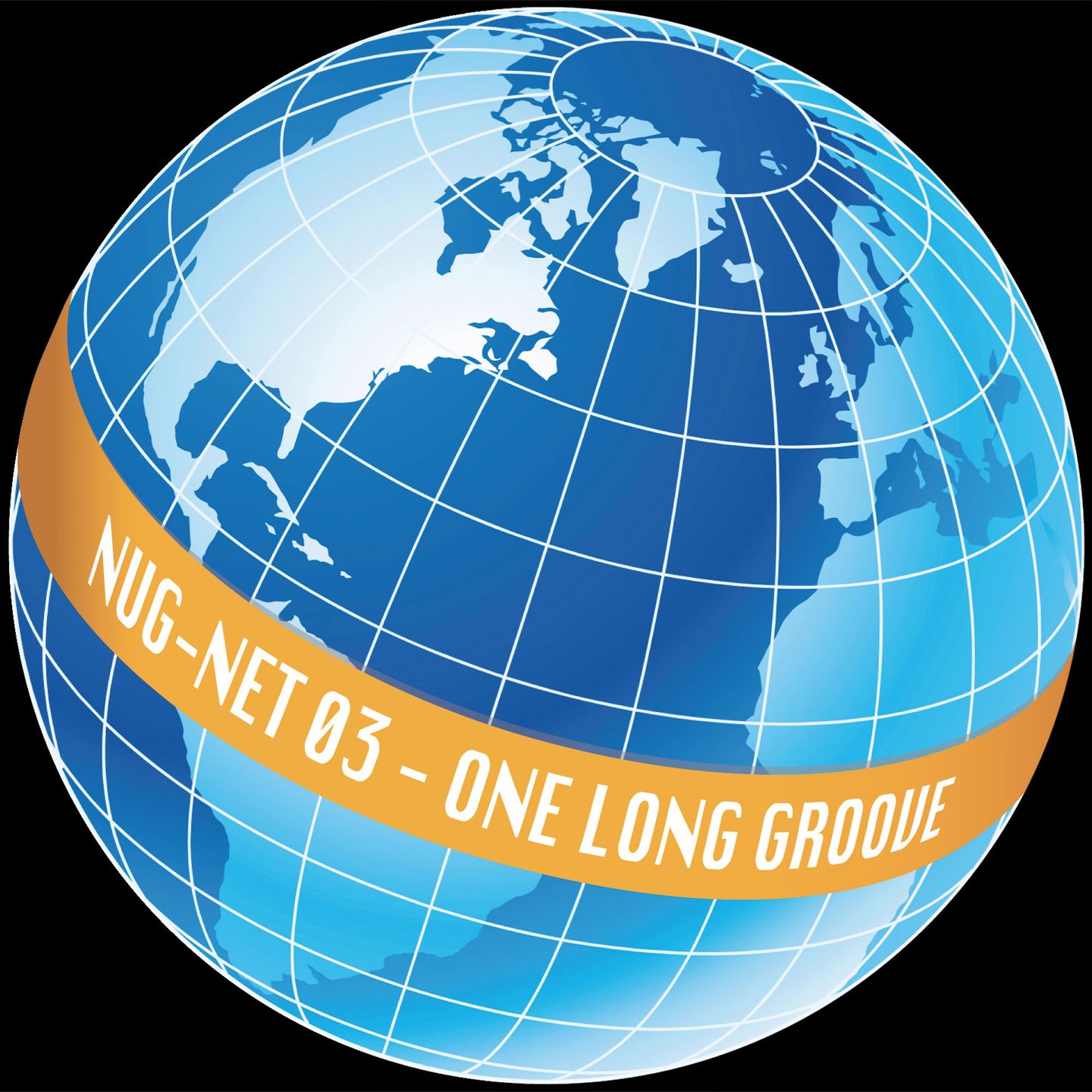 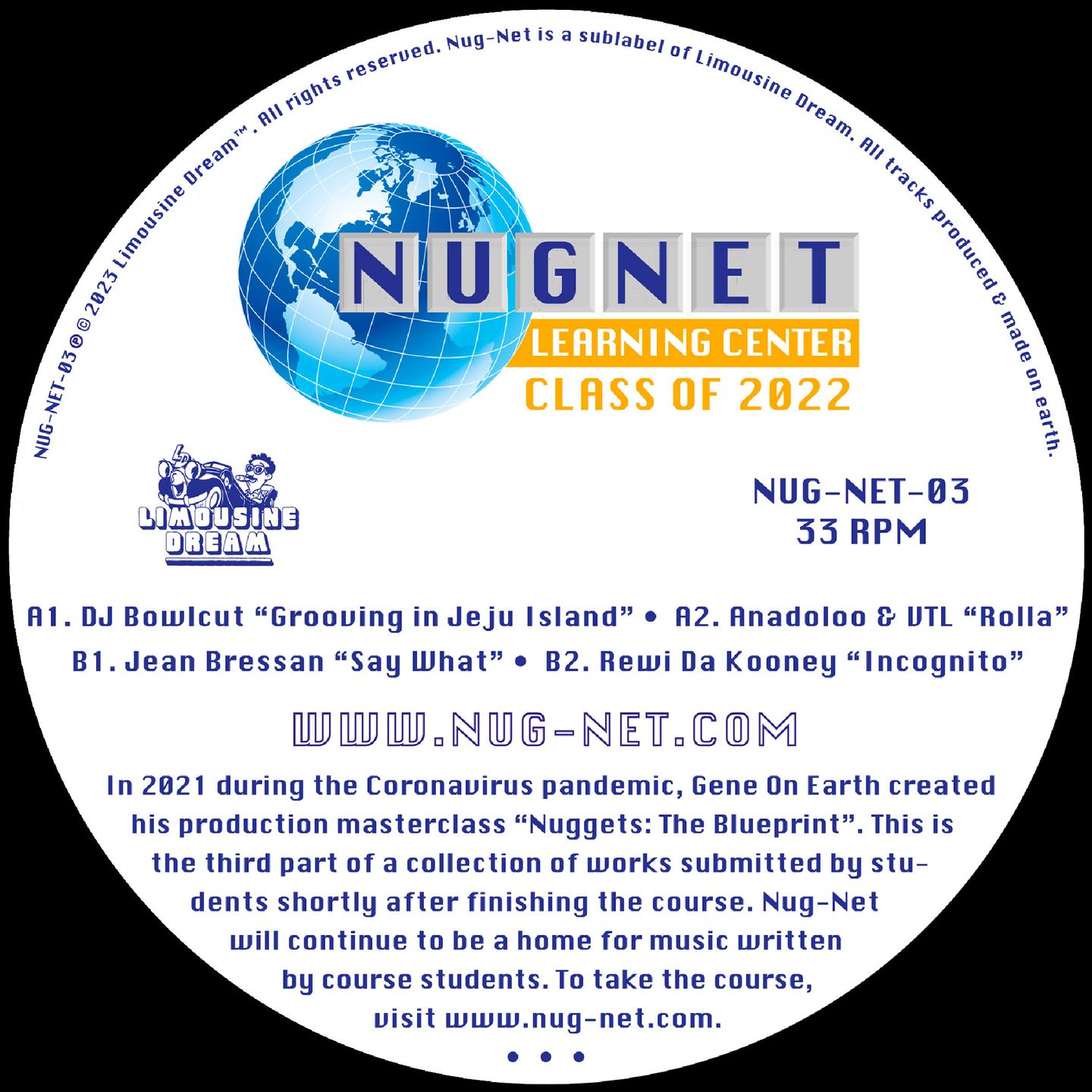 In 2021 during the coronavirus pandemic, Gene On Earth created his production masterclass “Nuggets: The Blueprint”.

In 2021 during the coronavirus pandemic, Gene On Earth created his production masterclass “Nuggets: The Blueprint”. This is the third release of a collection of works submitted by students shortly after finishing the course. The class of 2022 overcame expectations and birthed a digital compilation and 5 vinyl releases to come out during 2023. Nug-Net will continue to be a home for music written by course students. To take the course, visit www.nug-net.com. 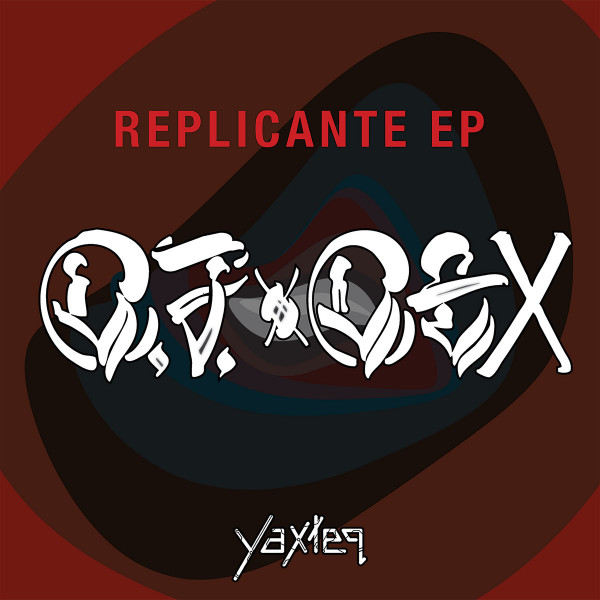 DJ Dex aka Nomadico of Underground Resistance is nearly out of time. So the Replicante is here to get more life... fucker!!! Dame más vida... Qiero más vida!!! There's no time to warm up or over think it... just feel the groove, move and you'll get there. The Off World is here, not in L2 orbit hiding behind the earth. This is the funky dark place that rumbles your dancefloor. His mentor Gaff has something to say about getting more life but he needs to slow down and disappear into the bass. Always on the move, spinning over skyscrapers and rising vertically into the clouds, the Spinner Theme is thumping and sets the mood just right. 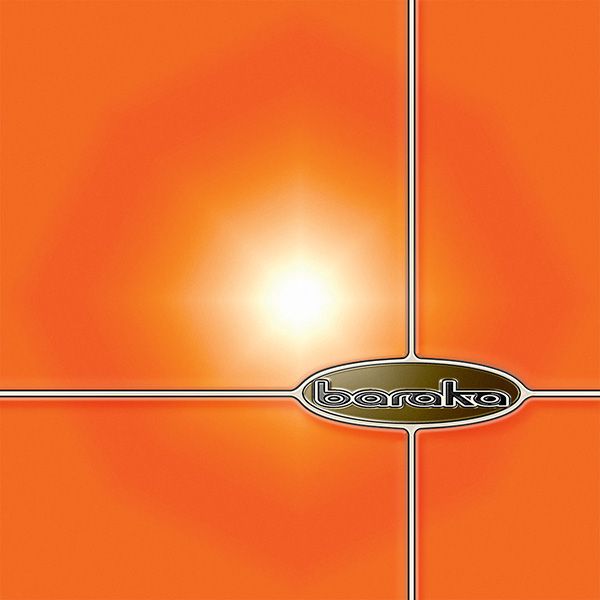 «I am the bridge between the day and the night that never ends, I am the acid drop that beads on your dancing body, I am the metallic breakthrough that crosses your being when I catch your wet hands, I am the brutal wave that grazes your dark gaze and your tired eyes, I am the titanium and the cyprin, I am the adrenaline, I am that being that invents, desires and revolts, I am that jolt of desire that tears me when it is dark, I am a psychoactive substance diluted in honey, I am the back that you caress, I am our first and last dance, I am the one who seduces you, I am the one who obsesses you, I am the solitary dance that bewitched me the first time we met, I am the cry muffled by our restless bodies, I am the movement that pierces and unfolds as if it were the last. I am solid and liquid, mechanical and organic, I am your first and last time, I am Baraka.»French duo Baraka present their first eponymous EP.Dive into their cathartic universe in which they celebrate their love for club culture using powerful TR8s, incisive break beats, synthetic layers inspired by trance and trip-hop as well as cavernous female voices.This alliance of electronic music, 90’ aesthetics and dreamy undulations intertwine like the yin and yang and promise a mystical universe with futuristic imagery. 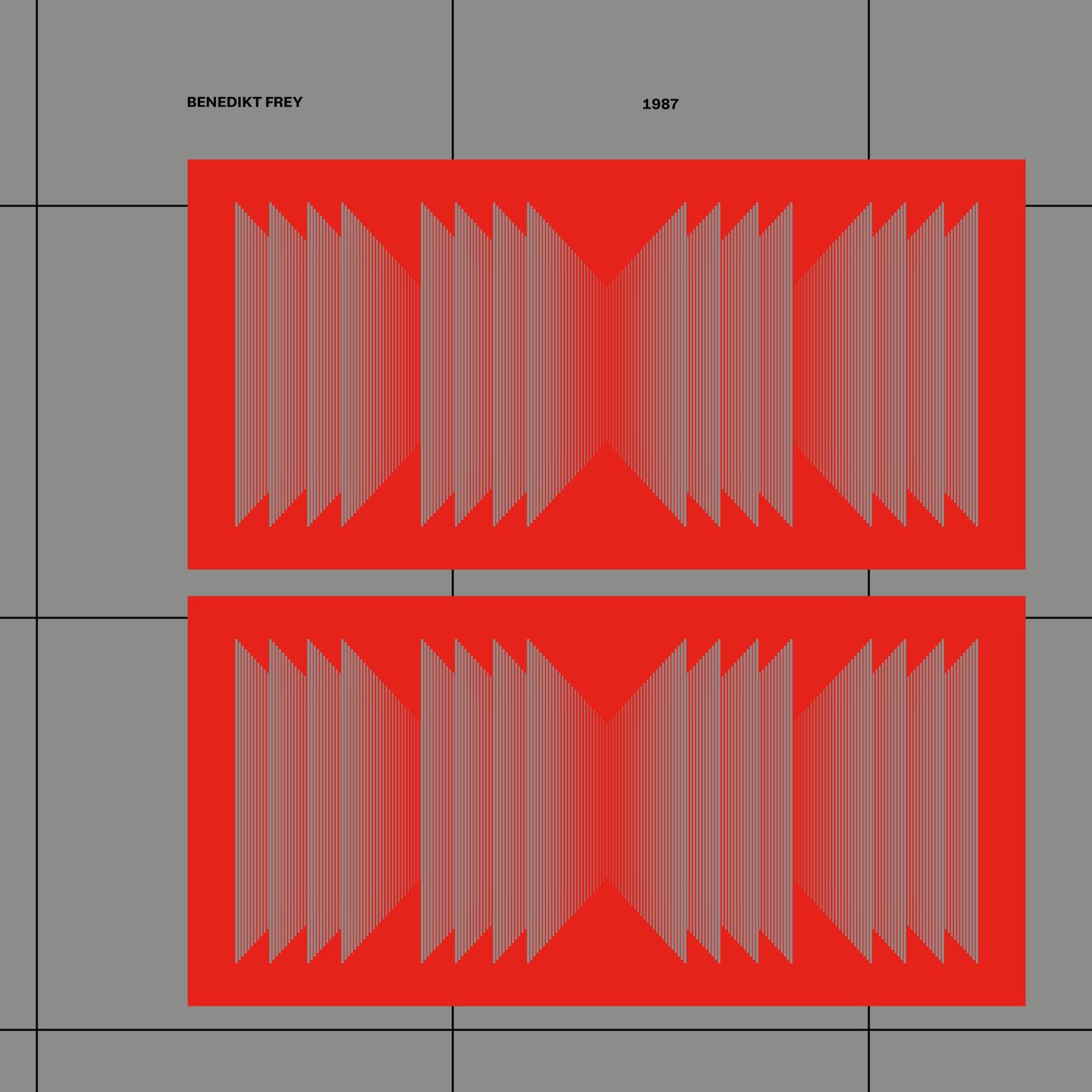 When British Airways got privatized and listed on the London Stock Exchange, somewhere in Canada the first Starbucks outside of the US opened, and the Walt Disney Company signed an agreement with the French Prime Minister to construct Disneyland Paris. In the sky above southern Argentina, Equatorial Guinea, Cameroon, Sudan, Ethiopia, Djibouti, northern Somalia, and the Atlantic Ocean a hybrid solar eclipse materialized for 7.57 seconds, whilst Margaret Thatcher performed for 45-minutes on Soviet television. Some days later, The Simpsons cartoon first appears as a series of shorts on The Tracey Ullman Show, Diego Maradona wins his first Italian soccer championship with Napoli, and Eighteen-year-old West German pilot Mathias Rust lands a private plane on Red Square in Moscow. In the mists of the world's first conference on artificial life at the Los Alamos National Laboratory, the first Kentucky Fried Chicken restaurant in Mainland China opens in Beijing, and Prozac gets approved for use as an antidepressant in the United States. Much give way for the future, down there in 1987, the year that marks the title of Benedikt Frey’s freshest mini album, out into the world on R.i.O., the label he runs with some pals in the North of Berlin. It’s a dubby melancholic conqueror, wistfully, repetitive, drilling, absorbing, spooking. It makes you dream. Not particular of the year 1987. But it’s all there: The Red Square, the untouched land of the Val d'Europe, Diego on fuego. Six dark-ish tracks in trance, melancholic dub, downbeat heaven, journey music depths, all full of light and yet so dark. Futuristic dramas linked to a speculative past. In our dreams all might look different. The eclipse may last 27- minutes. You meet Neuromancer cyberpunks and blade running Ghost dogs, all taught to hack by Phrack. Cristal clear melodies, sampled voices, and veiled basslines, analogue scopes, and digital ropes, longing for a past that storm into the future. A time where deep listening widens the acoustics into infinity, while neon glows charm the light smog. Benedikt Frey been down there. Or maybe not. His latest music tells stories from the bygone, vested with the forthcoming. Come in and look out. There is nothing to see, yet so much to hear.

Time On The Vine (Club Mi……

An all-star cast of remixers have gotten their hands on Gene On Earth's second album, Time On The Vine, with the task of making club remixes of the album's offtempo cuts. Sweely, Roza Terenzi, D. Tiffany, Youandewan, and Gene himself all turn in stellar effots. 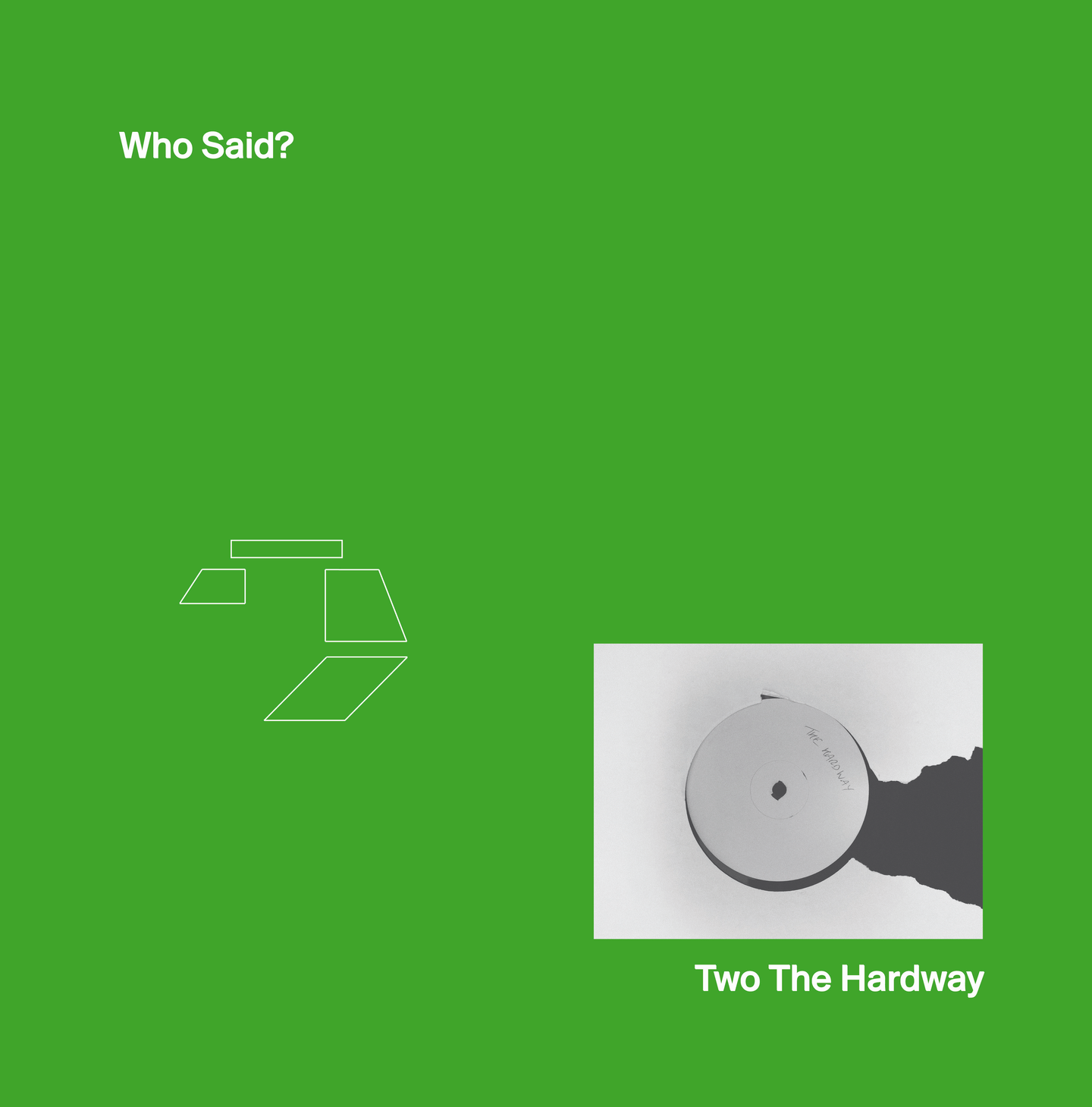 "Previously unreleased, Manchester, 1991. Betonska hits hard with their second release traveling back to an essential period of dance music history. A record blending rave, downtempo, ragga, dancehall, and early hardcore/breakbeat; a crossover that continues to shape and define some of the most innovative sounds of contemporary club culture.Produced by Philip Kirby, with vocals/rap by Martin Merchant (together Two The Hardway). On the A-side Graham Massey (808 State) accompanied them on the synths, and Howard Walmsley played the saxophone on the B1 and B2. All tracks were recorded in ’91 in Phil’s house, where “funnily enough Massey co-wrote ‘Army of Me’ with Björk!”. Find more info about it in the text below.The whole release consists of solely ’91 originals: a deliberate choice to not take it out of context. The A-side serves two versions of ‘Who Said?’, a mysterious midtempo jam with a jumpy acid line, organic yet punchy drums, and a mesmerizing lead synth played by none other than Graham Massey. The instrumental version has a more elusive feel to it, while the Vocal version tops it off with toasting by Manchester’s very own Martin ‘Sugar’ Merchant. Both tracks were pressed on the earlier test pressing from ’91, but have never been released officially before.The flipside boasts two mesmerizing versions of ‘Hot Number’. Driving proto-jungle rhythms and Sugar Merchant’s ragga vocals are fused with secondary vocals by Phil and a saxophone solo by Howard Walmsley to form a seamless and smokey sonic concoction that will get bodies moving. Whilst the B1 surfs on a slick breakbeat rhythm with a deep bassline, the B2 bounces on a 4/4 beat with a pulsing hardcore bassline.To top it off, the B3 and final track in the running order is a deep and dub track. Originally produced in the 90s, but recently finished by Phil, ‘Blossom Street Dub’ has an added synth line and an iconic King Tubby filter which help to enhance a time-warping, headrush effect. This track, alongside the ‘Hot Number (Alternative Version)’ B1 tune, will both be pressed for the very first time on vinyl, having been absent from the original ’91 test pressing. "ARTWORK BY SUSANNE JANSSEN